Those competing in the 470 class category will find several competitions to take part in this year if they have not already lined up their enrolments. Besides the ongoing events in April, there is a 470 European Championship coming up on May 6th by the coastlines of Italy. The new dates were announced recently and the competition will go on between May 6th and 14th, as decided by the International 470 Class Association. 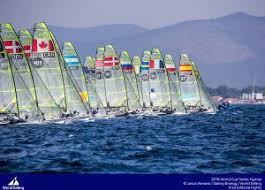 The Championship dates were brought forward so that they do not clash with Hyeres Regatta where many teams would also be participating. The 470 Opens is organized by San Remo Yacht Club with the venue being Marina degli Aregai, the same marina which had hosted the 420 class world tournament in 2016.

San Remo has a picturesque bay area, lying between the mountains and the sea. The wide bay here is protected by Capo Verde and Capo Nero headlands. It is the capital city of Italian Riviera region whose beauty and local culture attracts tourists from all over. The championship last year had been at Bourgas, Bulgaria. This event saw the Swedish and Slovenia teams as champions and this year to the Swedish teams look confident. Last year the highlight of the races was the medal races where intense competition was seen between the teams of these two countries. Sweden had gained gold in the 470 men’s categories.

This championship has been organized annually since 1970. It is jointly organized by the International Sailing Federation and 470 Class Association. It also forms part of world championships of ISAF. Those who wish to compete in the Olympics in the 470 categories find this one of the important international sailing events to be a part of. This year there would be men and mixed crews as well as women crew based boats participating as well.